These are not the release notes you are looking for! The final Confluence 3.2 Release Notes are over here.

Welcome to the Confluence 3.2 Beta program

With great pride we bring to you the Confluence 3.2 Beta release. We still have a few bugs to fix, but overall, this is how 3.2 will get rolled out to customers in mid March. And we want your feedback.

Note to partners and translators: The preliminary translation diff files can be found as a subpage of this overview page: Translations for Confluence Releases

This release is the last one to officially support Internet Explorer 6. Read the upgrade notes and the original announcement over here.

This release is the last one to officially support application servers other than Tomcat. From the next release on, Websphere and Weblogic and JBoss will not be supported anymore. For further information on this, please see the end of support announcements page

We are adding a new feature called Autocomplete to the Rich Text Editor. In this beta it only works in Firefox and Safari, but the goal is to make it work on Internet Explorer as well by the time the 3.2 release ships.
You can type "[" at the start of a line to display your browsing history and link to those pages, and if you keep typing you'll get recommendation for pages that match what you types: 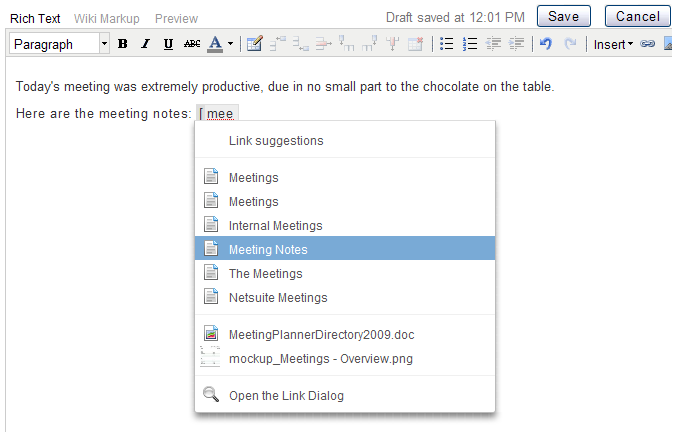 If you type "!" you'll see the attached images to the current page, and if you keep typing you'll be able to link to any image in your deployment. 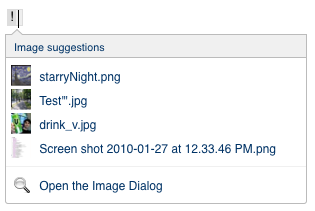 This feature's goal is to make the RTE even faster than using wiki markup. Try it out and tell us what you think!

Note: May require a re-index of your system to show attachments

We have rewritten the way you add links in Confluence. The new links dialog is faster, better looking, and more powerful. 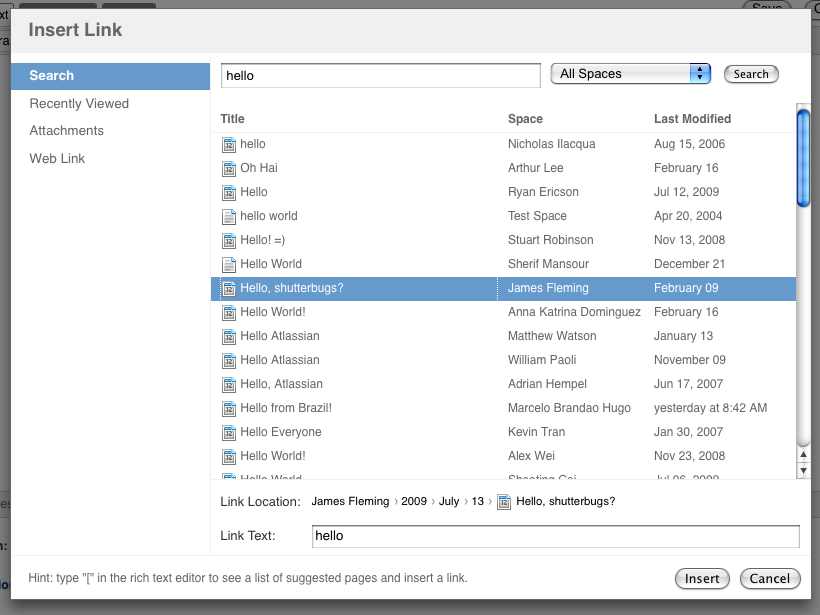 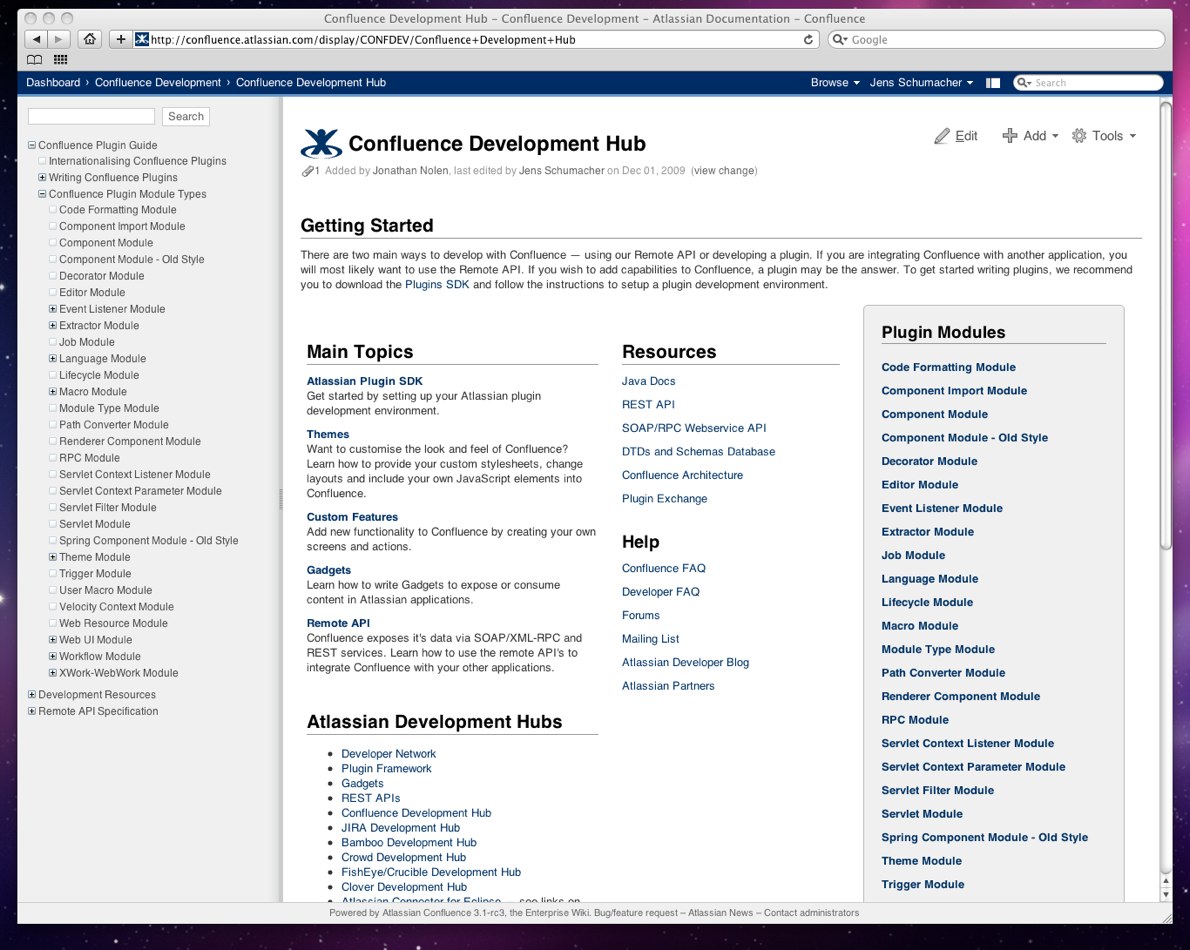 This theme replaces the old "Left Navigation Theme". We are still shipping the Left Nav theme, but it is deprecated and will stop shipping in a later release.

With today's huge monitors, it can become hard to read large amounts of text that spans the whole screen. We are introducing a new theme which, like most websites, only uses a portion of the screen, to facilitate readability. 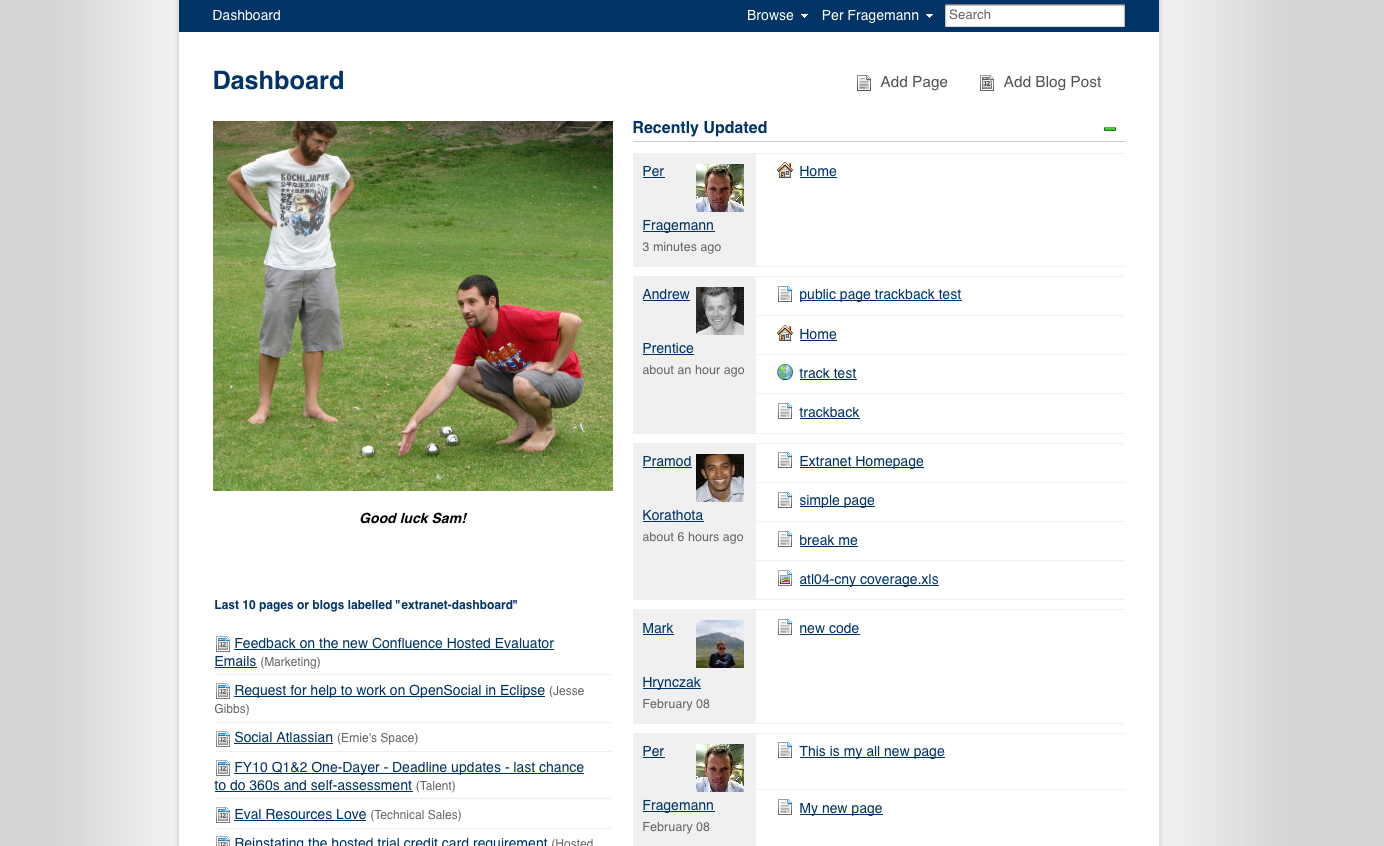 This theme replaces the old "Clickr Theme". We are still shipping the Clickr theme, but it is deprecated and will stop shipping in a later release.

The Bundled Templates 20% project is actually a framework to allow customers and Atlassian to deploy bundles of templates to a Confluence instance.

3.2 includes the framework plugin and a bundle of default templates[1]; these are available to the administrator to import into their instance as either space templates or global templates.

The templates import framework allows the administrator to preview a template before importing it as well as view the associated wiki-markup. 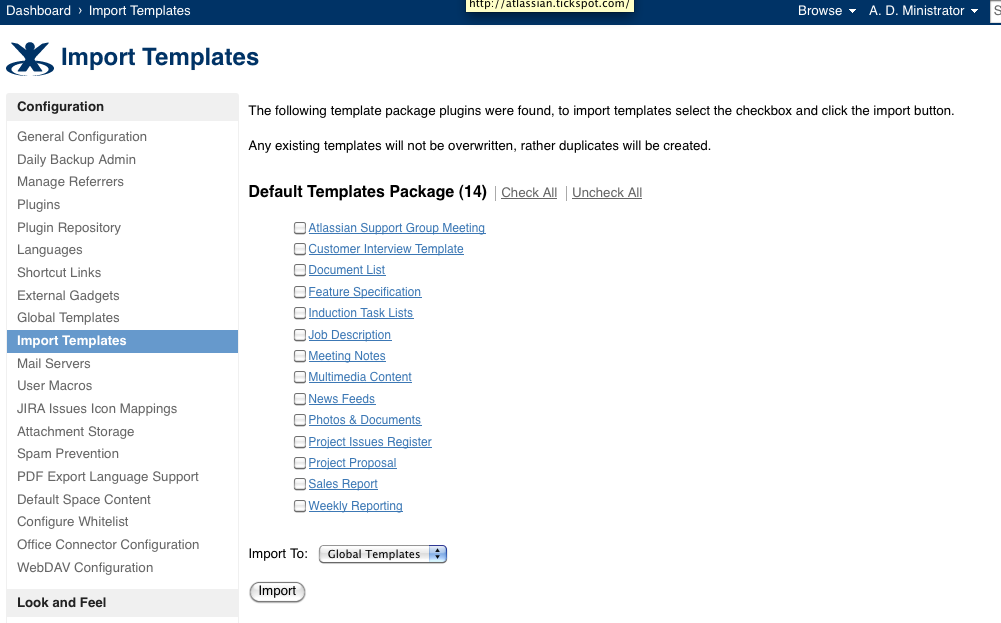 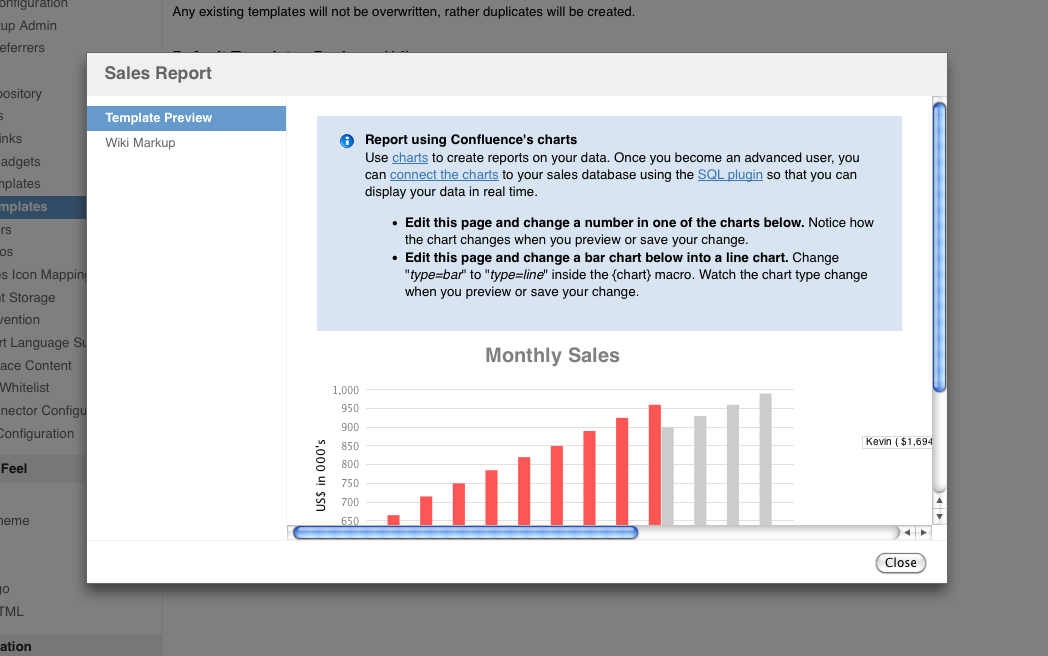 [1] Current default template bundle will be changed, pending list from Matt and Bill.

Documentation on how to write your own template plugin can be found here: Creating A Template Bundle.

We introduced a new page move dialog in Confluence 3.1 but the ability to change the order of pages fell out of scope. This has now been implemented and is accessed as shown - 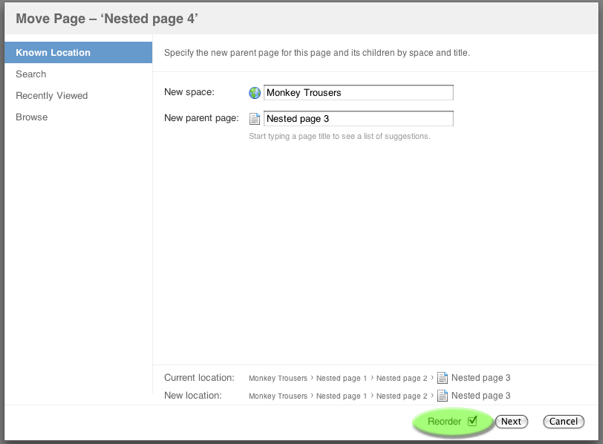 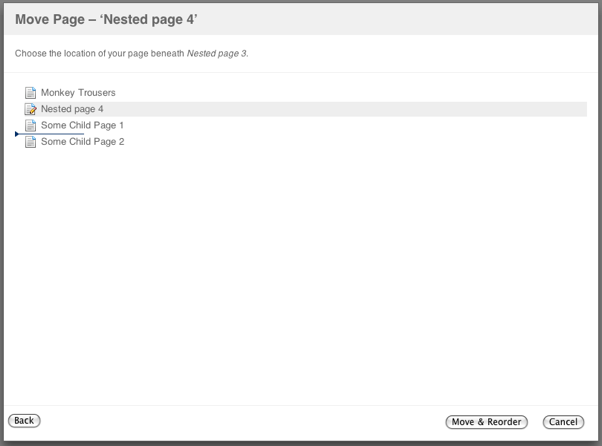 .. now is a bit more understandable:

The following RTE shortcuts have been added, please try them out!

At the bottom of the RTE, useful editor hints get displayed. This will help promote the new keyboard shortcuts and the autocomplete feature. 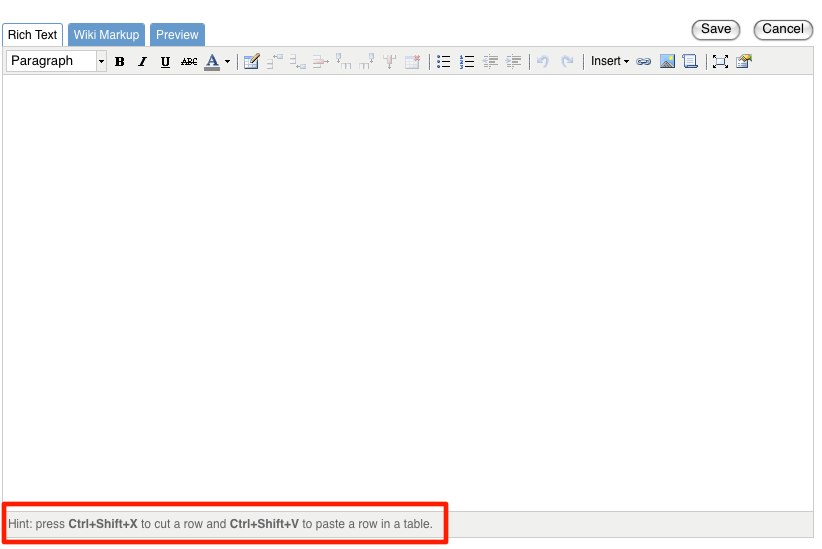 If an image is found, it will be displayed in the search results. The main point here is that we've made it possible to write plugins to spice up search results. You could write custom display for any kind of attachment types, or even change what the regular pages look like. 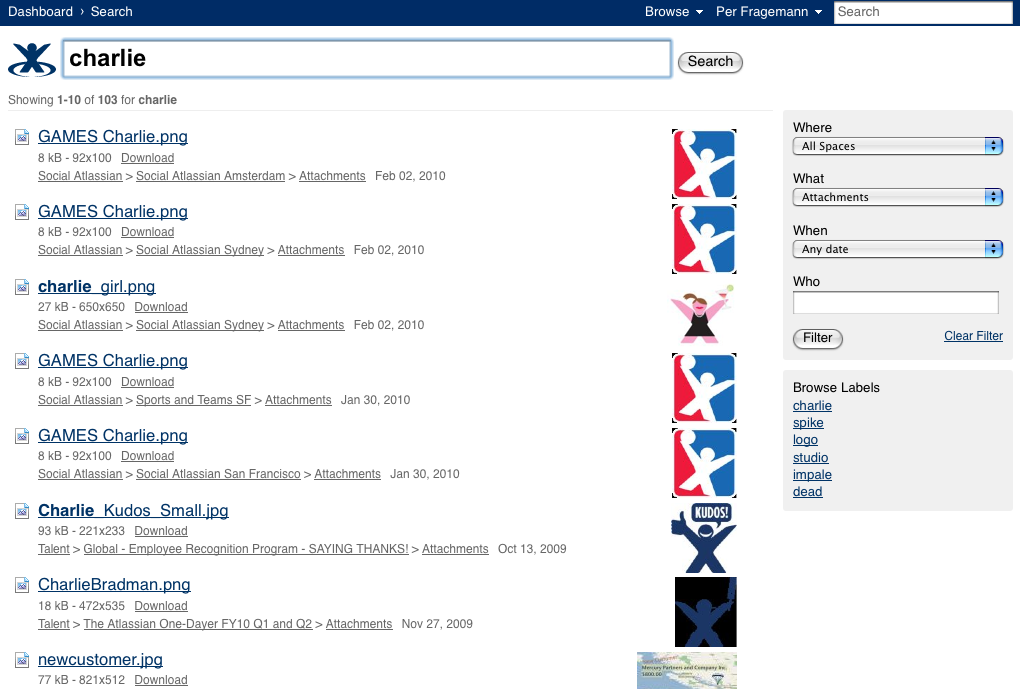 To improve the Evaluator experience, we're now bundling a few of the most common JDBC drivers.

A host of old bugs have been fixed. Most notable: