This documentation is intended for Jira developers who want to ensure that their existing apps are compatible with Jira 9.0

In this section we'll provide an overview of the changes we intend to make, so you can start thinking how it might impact your apps. Once they're ready, we'll indicate when a change has been implemented, and in which milestone.

With the release of Jira 9, Automation for Jira will become a native feature, bringing additional value to Data Center customers. This feature will be available both in Jira Software and Jira Service Management for automated, effective work. Automation for Jira will continue to be available in Jira 9 also for Server customers but will require an existing paid license.

The feature is still under development and minor changes related to configuration of the feature may be introduced.

To help you eliminate performance drops or crashes resulting from exceeding a certain number of entities in your Jira instance (for example, comments, active projects, or epics), we’ve created the Guardrails Tool.

The tool enables System Administrators to moderate a user group’s activity by setting a global limit on the number of specific items its members can create. For example, if you rely heavily on automation, you can limit the number of comments a bot account can add to an issue, which can help boost the performance of loading the issue view.

Additionally, Jira will send out an email notification every time it detects that a particular limit has been reached, is close to being reached, or has been exceeded.

Learn how to manage and configure the Guardrails Tool

The feature is still under development and its behavior, configuration, and name are subject to change. Additionally, in Jira 9.0 EAP 01, the feature is limited to controlling the number of comments created per issue.

The “View on board” feature gets a redesign for better performance

We’re replacing the old “View on board” feature with an entirely new experience aimed at improving the responsiveness of searching for boards that contain a particular issue.

Now, instead of searching through every board in the system, we’re limiting the search to only those boards that make explicit mention of an issue’s project key and your recently viewed boards. As a result, you’ll get more meaningful results much quicker than before.

The feature is still under development and minor changes related to configuration of the feature may be introduced. 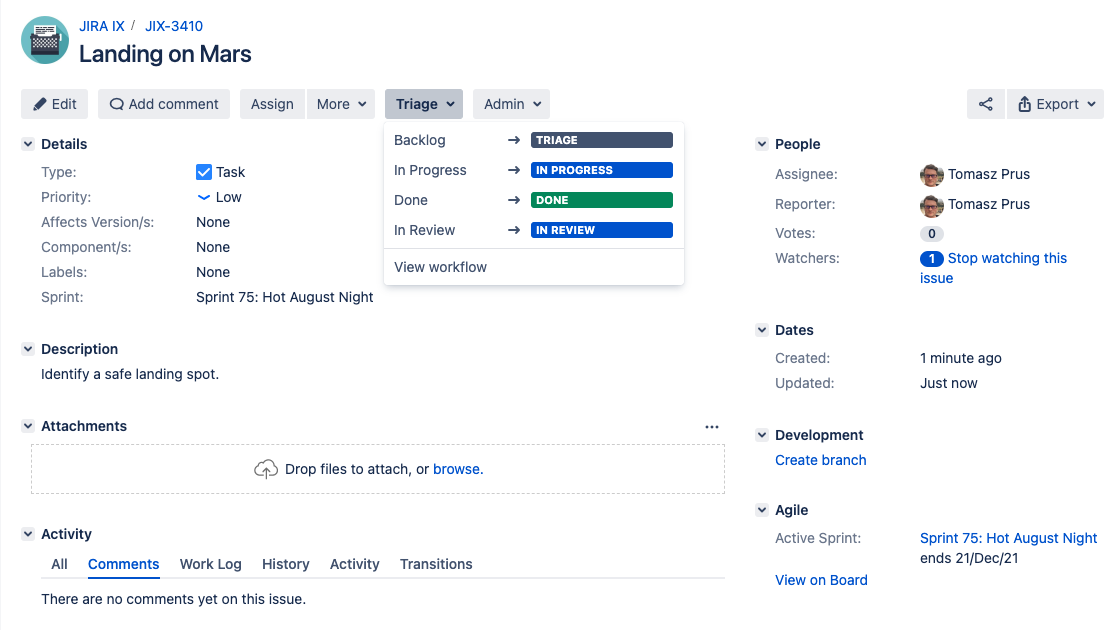 What do I need to know?

We’ve sped up the loading time of issues with a significant number of attachments. With the new functionality, thumbnails generation is deferred and asynchronous for the issue view by default. It speeds up page loading and reduces the amount of data processed at once.

To disable the functionality you need to setcom.atlassian.jira.thumbnailsDeferredGeneration.disabled parameter.

The attachment lazy-loading feature outside of the Issue view is disabled by default.

To enable the functionality you need to set com.atlassian.jira.allThumbnailsDeferred.enabledin /secure/SiteDarkFeatures!default.jspa parameter.

As part of broader Issue View improvements, we’re optimizing the way activity items such as Comments, History, Work Logs, and the All tab are displayed and organized.

In EAP 01, we’ve focused on Comments but we will ship further improvements in the upcoming EAP releases.

From now on, Jira won’t load all items at once. Instead, it will show 10 items (e.g. comments) on a page. The user can still see all comments but will have control over the presented elements, loading 10 older or newer elements with one click. In addition to that, we’ve changed the way sorting works so that the user has easy access to both the oldest and newest items (so far, Jira reordered the newest elements only). 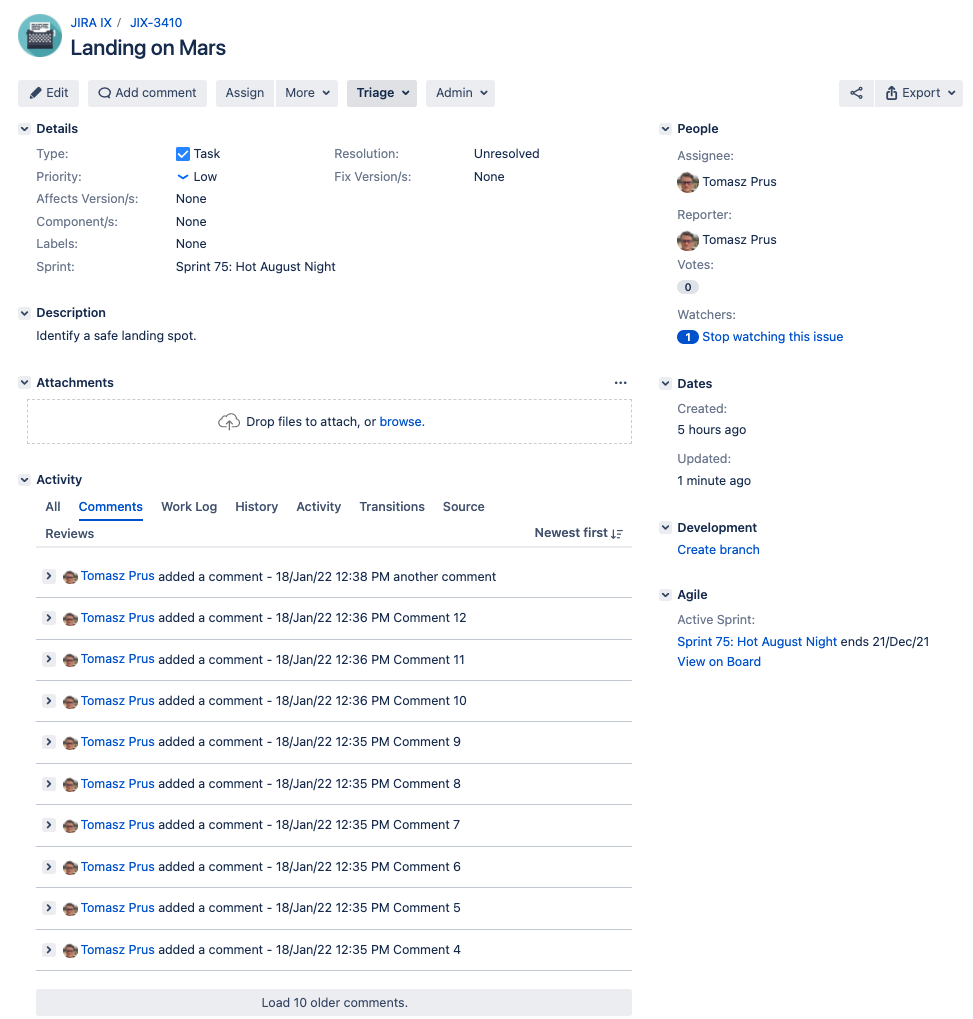 What do I need to know?

If you want to display your content in the All tab, you will have to implement a new API interface. The documentation and an example of a code for that will be delivered with the next EAP.

We’ve upgraded AUI to version 9.3.5, which replaces the Tipsy tooltip generation library with Popper. To make sure that your tooltips still work with the upgraded AUI, you may need to make some changes:

From now on, anonymous users attempting to perform GET requests on the previously listed endpoints will receive a “401 Unauthorized” response code.

Changes may be required for web actions invoked with POST/PUT/PATCH/DELETE having no @RequiresXsrfCheck annotation in Jira 8. Here are the general guidelines to follow while adopting to the new XSRF policy:

For truly safe actions, i.e. actions without state modifying side-effects (like pure reads or searches) simply change your front-end pieces to use GET (or HEAD or OPTIONS) HTTP method instead of POST/PUT/PATCH/DELETE. If you have a good reason to stick to POST/PUT/PATCH/DELETE (e.g. GET URL may become too long for certain supported browsers, therefore you choose to make POST as a workaround for browser’s limitation) - you may want to either:

- annotate your action with @DoesNotRequireXsrfCheck - but remember to use it with caution and to justify each usage in code comments,

- add an XSRF token as you would do for state-modifying actions.

For all other actions (i.e. for unsafe / state-modifying actions) change the front-end pieces to include XSRF token in the atl_token request parameter - exactly same way as you would do implementing action with @RequiresXsrfCheck in Jira 8.

Work on API breaking changes is ongoing. We will ship further improvements in the upcoming EAP releases.

The following API classes and methods were previously deprecated and are now removed: