Upgrading to Bamboo 4.1 is free for all customers with active Bamboo software maintenance.

Thank you for your feedback:

Please keep logging your votes and issues. They help us decide what needs doing, and are much appreciated!

You can download Bamboo from the Atlassian website. If upgrading from a previous version, please read the Bamboo 4.1 Upgrade Guide.

Get builds fixed faster with responsibilities

Finding it difficult to keep track of who caused a build to fail?

Builds that keep failing in series keep the same list of responsible people. When the build passes again everyone is taken off the hook for the failure.

The avatars for the responsible people are also shown on the Wallboard so you can easily recognize if the failure is yours.

We've also added a new Responsible recipient so you can notify only the people responsible when Bamboo detects events such as build failures, build successes and comments added. 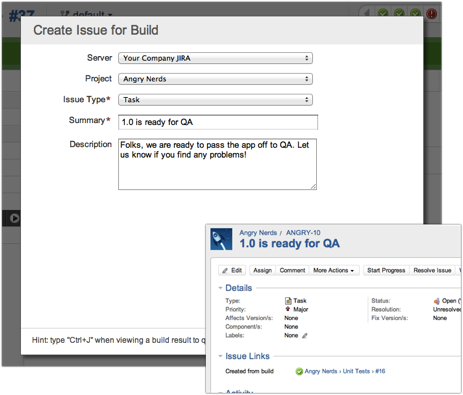 Quickly create a JIRA issue from any build result and have the newly created issue link directly back to the build result via JIRA's Issue Links. Creating issues from within Bamboo has lots of uses:

Get your team communicating with Hipchat notifications 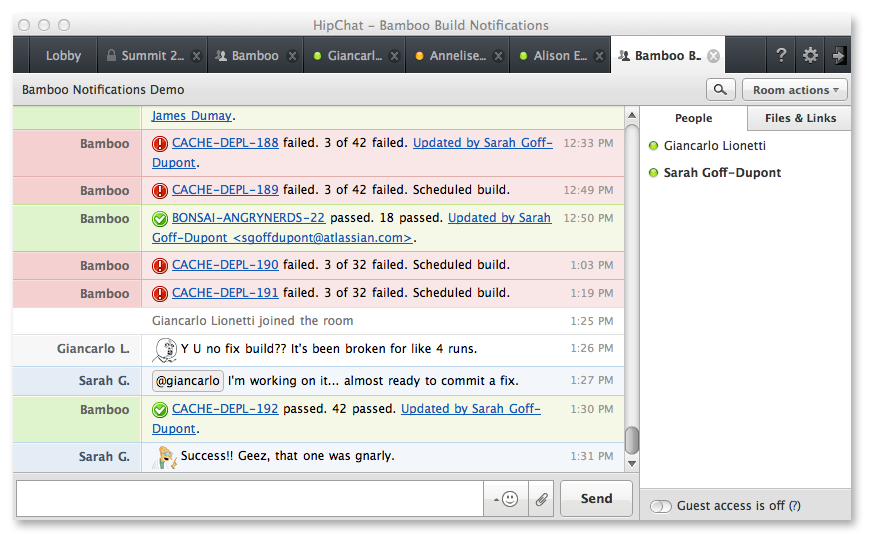 This year, Atlassian acquired HipChat — the pay-as-you-go private IM service that lives in the cloud. Bamboo 4.1 integrates with HipChat right out of the box, providing another way to get everyone synced up.

Color-coded build notifications can be broadcast to HipChat rooms, which automatically show the last 100 or so lines of chat history as soon as you enter.

Have Bamboo notify your team of build failures and deployment successes and get more information by clicking directly through to the build result.

Got distributed teams? Open up your HipChat room first thing in the morning to see all the build notifications from overnight. Or fire up the room from your smart phone application during your morning commute and really get a jump on the day.

Welcome to the family, Stash!

We welcomed Stash, a Git Repository Management for Enterprise Teams, to the Atlassian family this year. Just like we have for FishEye, the Bamboo team have built support for Stash repository links.

Any commits to a Stash repository are linked directly from the Changes on a build result to the change view in Stash, allowing you to quickly browse the changes in your build.

Plus Over 50 Fixes and Improvements

The top 10 issues are shown below. Please refer to our public JIRA site to see the full list of fixes and improvements in this release of Bamboo.