With supported versions of Bamboo and a Jira application, this information is collated within the Development Panel. This panel summarizes the status of all work related to an issue, and can assist in identifying where an issue's build is failing, and where it has been deployed.

Linking Jira applications and Bamboo has the benefit of improved information exchange during your development process.

See Integrating Bamboo with JIRA applications for information about permissions and configuration.

The Development panel provides an at-a-glance development information resource, and is visible to anyone with the View development tools project permission. The panel replaces the Builds tab and Issue deployment panel, and summarizes an assortment of development data passed to Jira applications from Bamboo and other Atlassian products. Examples include: 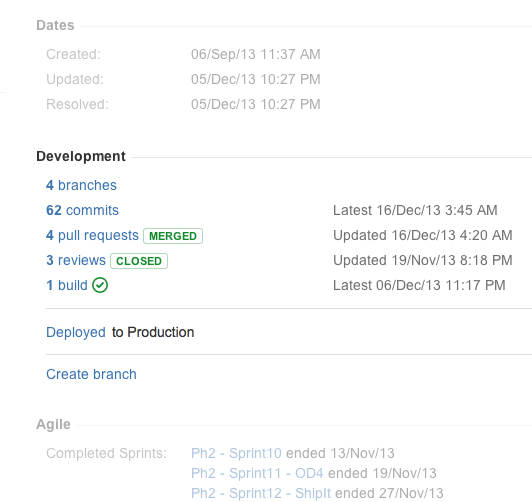 The Development panel shows the status of the latest Bamboo builds related to your linked issue. Using simple status icons builds are reported as:

A build is automatically linked to an issue if one of the build's commits includes the issue key in its commit message. The issue key must be included in the commit to activate this feature.

Select the associated build link to see additional build details including the name of the plan branch and how many tests passed or failed:

A deployment to an environment, such as Production or Testing, is linked to an issue if a commit associated with the deploy contains the issue key in its commit message. The Development panel details the environments that associated Bamboo builds have been deployed to.

The issue key must be included in the commit to activate this feature.

Select a deployment name to see deployment details including the deployment status, release date, and select to view a particular deployment: