2. Exploration of coverage in Eclipse

The Coverage Explorer allows you to view and control Clover's instrumentation of your Java projects, and shows you the coverage statistics for each project based on recent test runs or application runs. It is automatically added to the workbench when you enable Clover for your project. If the viewer is closed, you can open it again using "Window | Show View | Other..." and selecting "Clover | Coverage Explorer".

The main tree shows coverage and metrics information for packages, files, class and methods of any Clover-enabled project in your workspace. Clover will auto-detect which classes are your tests and which are your application classes - by using the drop-down box above the tree you can then restrict the coverage tree shown so that you only see coverage for application classes, test classes or both. 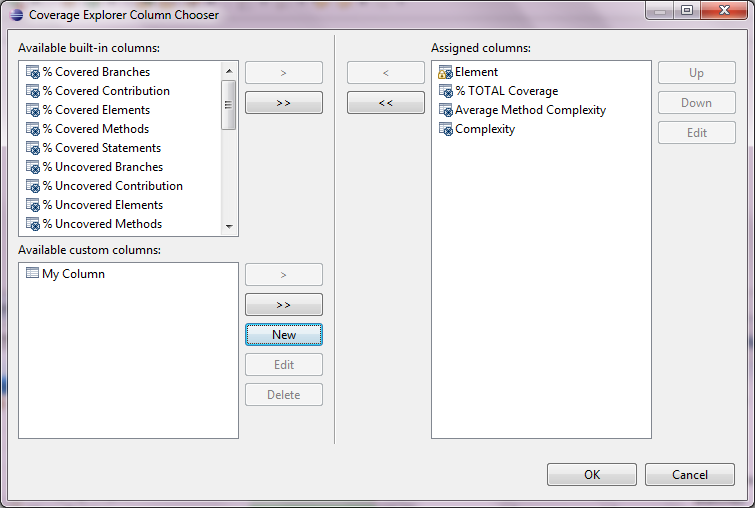 Clover-for-Eclipse also lets your define your own custom columns for display within the Coverage Explorer tree. While choosing columns in the Column Chooser dialog, click the "New" button to summon the Custom Column Builder dialog. Custom columns must have a name and a valid Clover expression. Custom columns may be left, center or right justified and the value may be displayed as a decimal value or as a percentage value. Clover expressions can refer to any of the 24 standard columns; these references can be easily inserted into the expression by selecting "Insert..." and choosing the appropriate column name.

Summary metrics are displayed alongside the tree for the selected project, package, file, class or method in the tree. The following metrics are provided:

The Coverage Explorer view allows the following actions (from the view toolbar, menu or both):

The Coverage Explorer view has also actions accessible from buttons and links in browser (left panel) as well as on left/right click on elements in a browser:

The table below explains the meanings of various colors:

In case you don't see hit counts on a left margin ruler, then right click on it and ensure you have the "Show touching tests" toggle enabled.

Each coloured source annotation displays a tool tip providing more information about the relevant line or lines. These coverage annotations are added automatically to any opened source files from a Clover-enabled project. For example, if a statement was executed ten times, or a conditional expression was only executed twice in the true case but never in the false case, this information will appear in the tool tip.

You can also change these colours and effects in Eclipse. To do so, access 'Eclipse Preferences > General > Editors > Text Editors > Annotations'. On this page, see the 'Annotation Types' list and click the settings that begin with 'Clover'.

Coverage cloud report are a great way to work out the classes that form major risks (low coverage but high complexity) to your project and its packages, and also to highlight potential quick wins for increasing the overall project or per-package coverage.

The coverage cloud report has two tabs, one tab for the project/package risks cloud and the other for quick wins cloud. Each cloud shows the classes of the project/package enlarged or reduced depending on their significance to the report and clicking on any class name will open the corresponding source file in an editor. At the bottom of the report you can select the target for the clouds - either the entire project or one of the packages within the project - changing this will update the cloud tabs. Where a package is selected and has sub-packages, the checkbox "Include classes from sub-packages" allows you to include or exclude sub-package clouds from the clouds.

The coverage cloud report can be generated by right clicking on your Clover-enabled project in the Coverage Explorer view or Test Run Explorer view and selecting Generate Coverage Cloud. 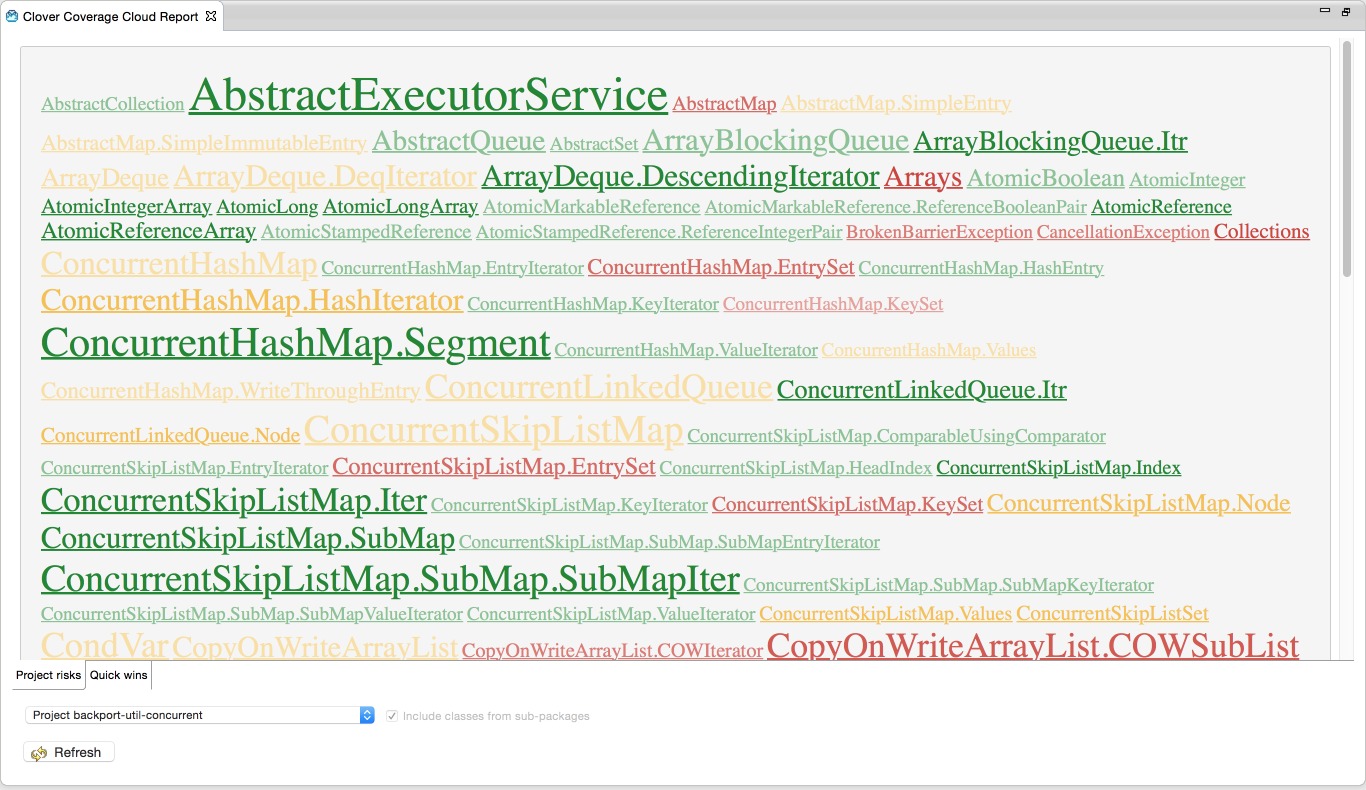 The Package Risks Cloud highlights those classes that are the most complex, yet are the least covered by your tests. The larger and redder the class, the greater the risk that class poses for your project or package. Package risk clouds can be toggled to include or exclude classes in sub-packages.

This Cloud highlights the "low hanging coverage fruit" of your project or package. You will achieve the greatest increase in overall project coverage by covering the largest, reddest classes first. Package Quick Win clouds can be toggled to include or exclude classes in sub-packages.

The percentage shown in the yellow box is the code coverage for the class currently under the mouse.

The treemap cloud report can be generated by right clicking on your Clover-enabled project in the Coverage Explorer and selecting Generate Coverage Treemap. You can also click on a Generate a coverage treemap button. 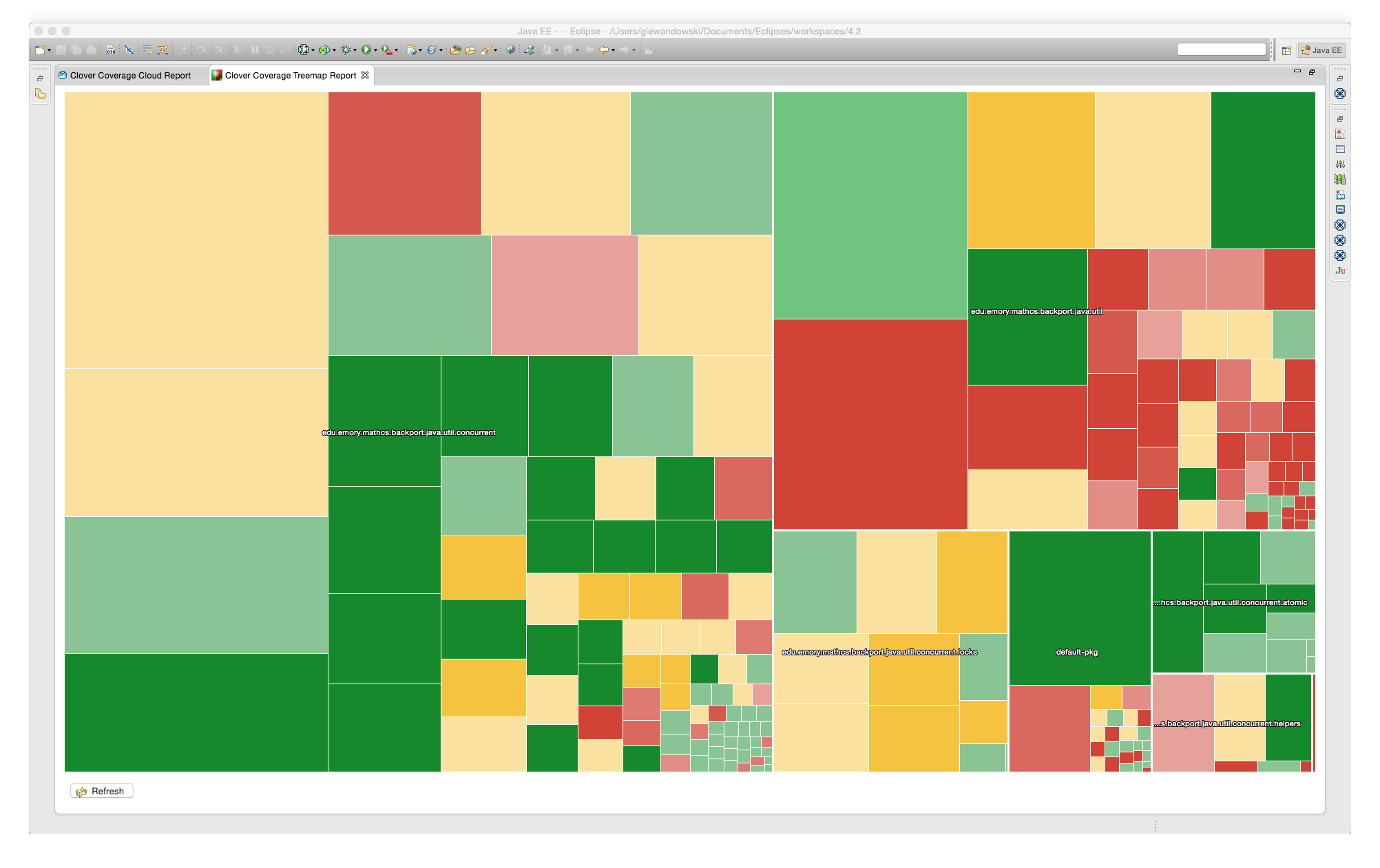 Now you perfectly know how your application is covered. But how to efficiently navigate between tests and application code? Read the 3. Exploration of test results in Eclipse chapter.