Monitoring the progress of the work of your teams is equally important when planning work. By monitoring progress, you can quickly see if there are potential bottlenecks, and you can act on these bottlenecks so they don't end up happening.

There are several ways to monitor the progress of the work of your teams across your Portfolio plans.

You can add the progress columns in your roadmap, to visualize the issues in your plan with the following status categories:

You can choose to display progress using estimates or issue count, or even both, as shown in the sample plan below. Note that you need to add these columns to your plan so these details will display accordingly.

This sample plan is using hours to estimate issues, and the two (2) progress columns are displaying progress in terms of the estimated hours, and in terms of the number of issues. Note that you can use one or the other, or even both progress types at the same time. Both progress types can provide different levels of information, which you'll find useful when monitoring overall progress.

Any issues that have been marked as done in Jira, that don't have a resolution set, will not be included in the plan.

You can use the estimates of issues to monitor the progress of work. By default, estimate-based progress is based off the aggregated estimates from all descendant issues.

Hover over the progress bar (estimate unit), and see the breakdown of work in estimates, as shown in the sample below.

However, if an epic has an estimate, then the progress of its parent issue will include the estimate of that epic and the rolled up estimates of its child issues, as shown in the sample below.

You can also use issue count to monitor the progress of work, as shown in the sample plan below.

Any issues that are not saved to Jira will not be taken into account in calculating progress.

To monitor capacity in your plan, you first need to show capacity in the timeline of your plan. This is only possible if you group issues by teams. 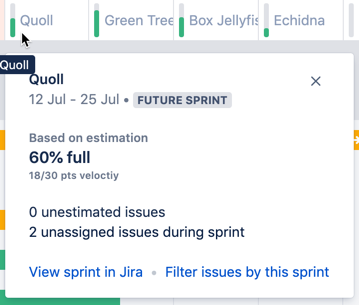 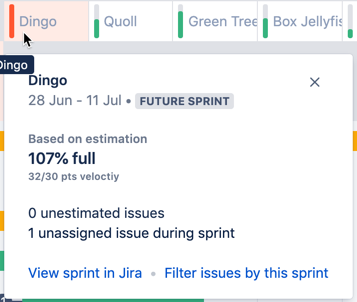 Samples of healthy and unhealthy sprints

In the above example, clicking the capacity bar of a sprint will display the capacity details which may include:

The Dingo sprint is showing a red capacity bar, which means too much work has been allocated to that sprint. With this visual indicator in the timeline, you can then quickly consider how to fix this up — either by removing some issues from that sprint, or adding more people to the corresponding team.

For both Scrum and Kanban teams, the capacity bars reflect how work is evenly distributed across the corresponding duration (sprints for Scrum, iterations for Kanban). This is the basic premise on how work is distributed in the current plans.

Capacity is measured against the duration of a week. If weekly capacity is set to 200 hours, then the capacity details will show the percentage of how full the iteration is in terms of the estimated hours.

To know more about showing sprints and capacity in your plan, see Grouping by teams.

From the releases view

You can jump to the releases view of your plan, to grab a high-level view of how work is tracking. More importantly, this will help you realistically determine if your teams can complete the work assigned to the releases in your plan.

Green icons represent releases that are on track, while red ones are for releases that are off track. As long as the start and end dates of the issues fall within the start and end dates of their corresponding releases, then the releases stay on track. Click on an icon to view more details about the release, and more importantly, to determine how you can fix the state of off track releases.

The number of releases could accumulate over time, which can make it hard to navigate from one release to another on the timeline. There may be times when releases are only one day apart, or there may be multiple releases scheduled on the same day.

If this happens in your plan, try doing one of the following: