The timeline shows the results of resource calculation and forecasting based on the data in your plan. It provides visibility into forecasted release dates, timing, teams, and members. Epics and stories are scheduled, as well as details and bottlenecks.

How do I see the release start date?

Which indicator defines my current day?

What are the start and end dates of the work items?

When you select a work item, you can see the start and end date of that item marked in blue. 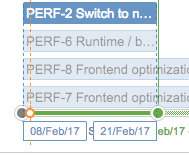 How do I know that a release is overbooked and what does it mean?

When a release is overbooked, the timeline displays in red the time that the overbooking applies to.

An overbooked release implies that you have assigned more work to the release that what can really get done by the manually assigned fixed end date.

How do I identify that the release is going as planned?

The green line indicates that there is no overbooking and the project progress planned on time.

What is a buffer?

It is period between the computed release date and the manually fixed date. In the following example it is the line that goes from the 21st February and the 1st June.

If the issues assigned to a release are completed before the release end date, the release will still have time without tasks, that period of time is the buffer.

How do I see the difference between manually assigned fixed date and calculated release dates?

How to configure the graphic schedule views

When you make changes to your plan, and click Calculate to ensure these changes reflect in your plan.

Checking issues from the timeline

I don't see sprints in the timeline

The teams in the plan must be assigned to boards as issues sources.