This page refers to Portfolio classic plans. If you are currently running Portfolio 2.0, please check this link to access the latest page version.

You can define releases by creating them directly in your plan, importing them from a project, or linking existing releases to existing versions.

The release view has the following properties:

How to create a release stream

How to create a release stream

A stream is composed of a set of issues and associated releases; It's delivered on its own release cadence.

For example: In the following screenshot you see that the "Core Product" work stream is divided into two different releases.

Create a new stream by following these instructions

Release streams use cases and configuration

How to assign a team to a release stream

You can set a team to be dedicated to a particular release stream so that when the schedule is calculated that team is auto-assigned to backlog items within that stream. The auto team assignment based on streams can be overridden by manually selecting a team from the Assignable Teams list.

How to assign backlog items to streams

Once streams are defined, backlog items can be assigned to streams and releases within these streams. The release selection cell indicates both the assigned stream and the version within the stream.

Release streams on the graphical schedule

The releases view reflects the streams as well, and shows summary cards for each release in each stream: 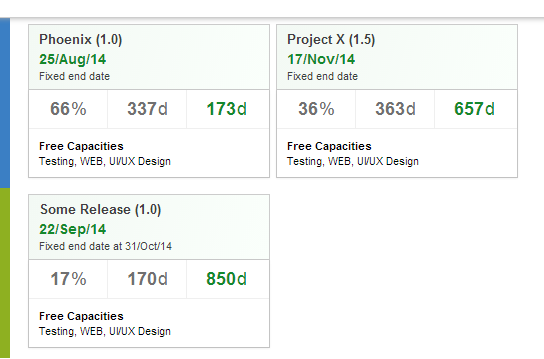 How to create a release

How to create a release

In Portfolio for Jira, a release is a set of work pieces called issues that are scheduled to be completed at a planned point.

In many cases it is helpful to define an overlap between releases. In practice, very often even if a story is scheduled for the next version, the UI/UX Design might be completed while the previous release last feature are still in implementation or testing.

An overlap generally has the semantics of "can start up to .. before the previous release ends".

For example: The actual work for the second, overlapping release is only started if there are free, unused capacities that are not required for the earlier release. In the screenshot below, v2.0 is scheduled to start up to 6 weeks before v1.5 is completed, but only if enough resources are available, and therefore v1.5 still has priority).

The most frequent, expected cases when items are scheduled in the later release include:

You can check which items fit into a particular release by using the filters.

How to scope a fixed release

How to scope a fixed release

Use case example: You have a backlog full of epics, stories, fixed target release dates and you want to ship a release every month, even larger updates, three and six months from now.

How to import a release

How to import project release versions

You can import existing versions from your projects and include them in your plans by creating or adding the versions to existing release streams.

How to link a release version

How to link Jira versions to releases to your plan

You can link existing versions in your Jira projects to existing releases in your plans. Multiple versions can be linked to a release, but only one version can be added from each project.