Gadgets do not display correctly after upgrade to JIRA 4.0

This issue has been resolved in JIRA 4.0.1

The following errors may appear when using gadgets:

However if the URL is a relative URL as in the error above, JIRA is having issues retrieving gadget specs it's hosting itself. Eventually JIRA will no longer retrieve gadget specs via a HTTP request back to itself and make an API call instead. This has not been implemented as of this writing.

The problem is caused if JIRA is setup behind a proxy (such as Apache) or if there are issues with SSL certificates. Here's a detailed list of all reported configurations that can cause this problem so far: 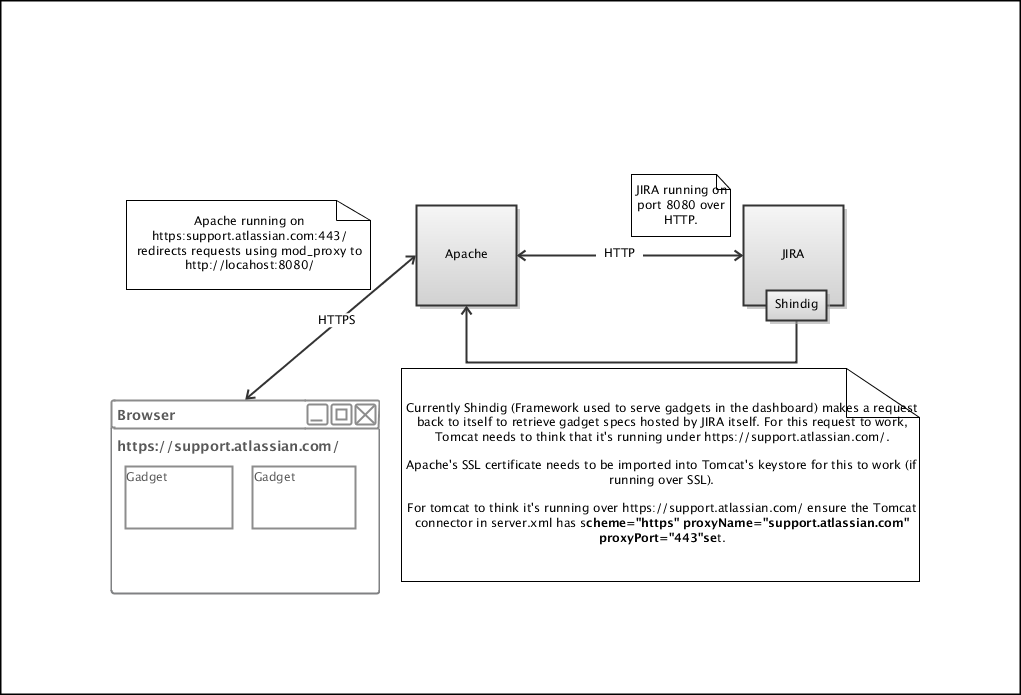 If you are using Apache, please follow the documentation about setting up JIRA with Apache exactly:

Also ensure that outgoing requests are allowed by your firewall back to JIRA itself. If you're using iptables to redirect port 80 to 8080 then also ensure that you redirect any OUTGOING requests back to port 8080:

If you're suffering from the hosts file problem, make an entry in the JIRA server's hosts file for the hostname your JIRA instance is using.

The basic auth problem can be solved by not enforcing basic auth for requests from JIRA back to itself. E.g. all that needs to be excluded is calls to /jira/rest. This could perhaps be further limited to only exclude requests from the server's IP:

If you are using SSL with a self signed certificate or signed by a CA that is not in Java's cacerts file you will need to import that certificate into the java trust store (cacerts file).

For a self signed certificate

For a CA that is not in Java's cacerts file you need to import the CA's root certificate.

Download the Dashboard Diagnostic Plugin for more detailed logs and attach them to your JIRA case.