This guide contains instructions for setting up the component services for an Enterprise-scale instance of Hipchat Data Center using VMware hosts. This type of deployment uses three VMWare hosts for the Hipchat nodes, plus a load balancer to route traffic to them, and a Postgres instance, Redis cache, and shared NFS for file storage.

If you're deploying for high availability you must also deploy highly-available versions of the component services, and that may require additional hosts and infrastructure.

Use this deployment configuration if: 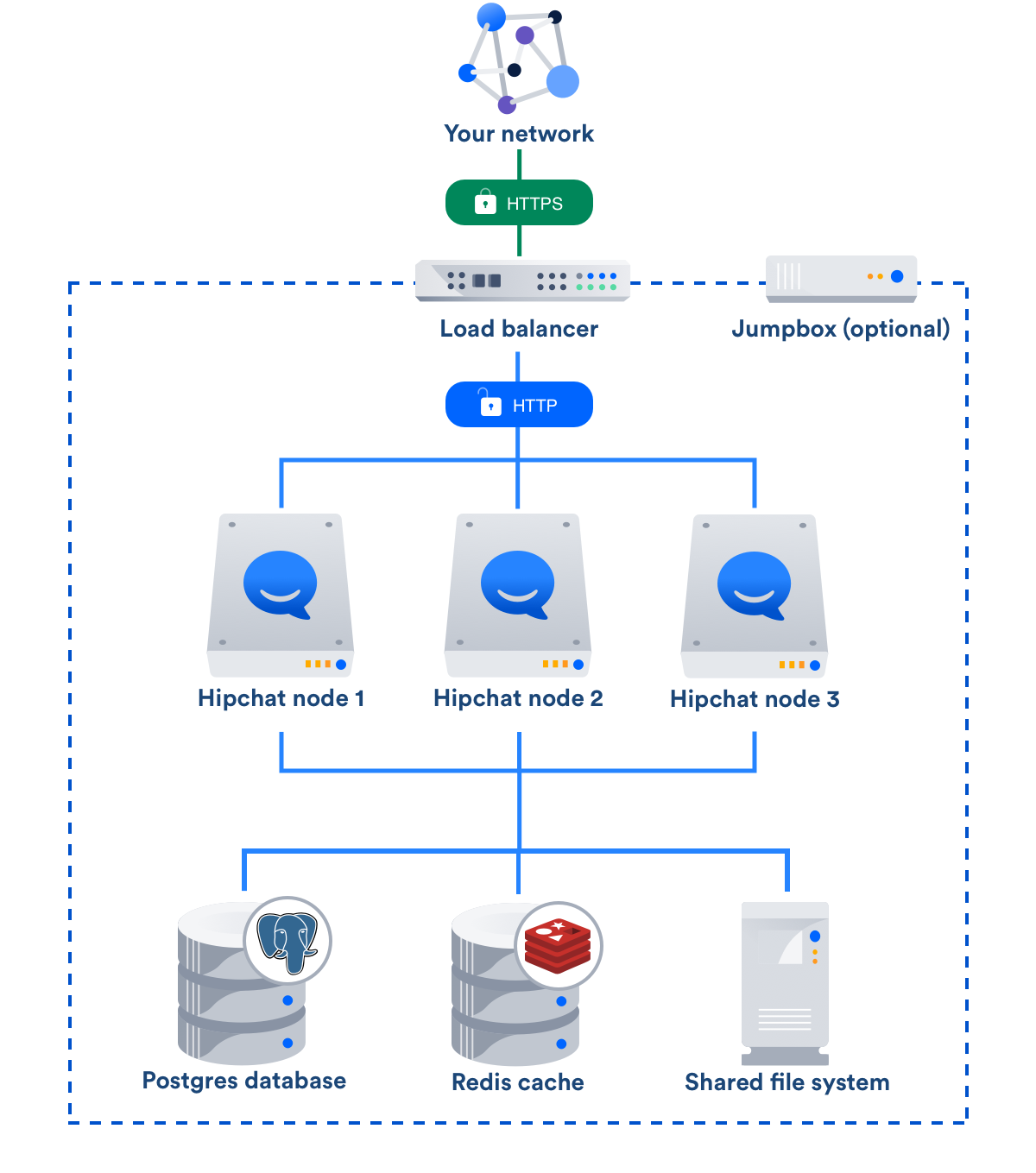 An Enterprise-scale deployment can provide stability and improved performance at scale, and when configured for High Availability, can prevent downtime in the event of a service failure. An Enterprise-scale Hipchat Data Center cluster is deployed with three Hipchat nodes, and can be deployed either with, or without, highly-available data stores.

If you're deploying an Enterprise-scale cluster, you must deploy exactly three Hipchat nodes. If you chose this option because of the number of users in your organization, a two-node cluster would give you a false sense of security. If one node of a two-node cluster were to fail, the second one would immediately be overwhelmed with traffic and also fail. If you're deploying a HA cluster, three nodes also allows you to place these nodes in different locations geographically. (The AWS CloudFormation template places each Hipchat node in a different Availability Zone automatically.) Deploying more than three Hipchat nodes is not supported at this time.

In a non-HA Enterprise-scale cluster, you can deploy a single load balancer, Postgres instance, Redis cache, and NFS file store along with the standard three Hipchat Data Center nodes. However, if you want true high-availability, you should also deploy highly-available versions of each of these components. More details about the hardware requirements for HA are available below. You can also refer to the documentation for each component for more configuration details.

The sizing guidelines we provide here assume that you're deploying Hipchat Data Center for the first time. If you're migrating from an existing Hipchat Server deployment, you might need to increase the amount of storage for files in the NFS share, and space in the Postgres database, based on the number and size of messages in your exported server data.

Planning for apps, add-ons, and integrations

If your deployment will use apps, add-ons, or integrations which are hosted on the public internet, you must make sure that your cluster allows the Hipchat nodes to access them. You can set up a forward proxy (sometimes called an "outbound" proxy) to allow the Hipchat nodes to reach external apps, and configure your network so that the apps can reach your reverse proxy (or load balancer).

If you are unable to connect your cluster to the internet for security reasons, some open source add-ons allow you to download their source code, inspect it, and rebuild it to host it on your network as a private service.

You can add nodes to a small-scale deployment to create an Enterprise-scale deployment which can serve more users. When you do this, you need to make sure that the proxy service you used as a small-scale deployment can also function as a load-balancer. The load balancer for the cluster terminates SSL and distributes client connections among the Hipchat nodes, and must support cookie-based session affinity ("sticky sessions"). If your proxy doesn't meet these requirements, you'll have to replace it.

If your deployment requires high availability (HA), you need to configure the component services to be highly-available too. (It doesn't matter if the cluster is up if your load balancer fails, and nobody can get in!) This may require additional infrastructure. The Hipchat nodes must be able to access each component service through a single endpoint for the service. 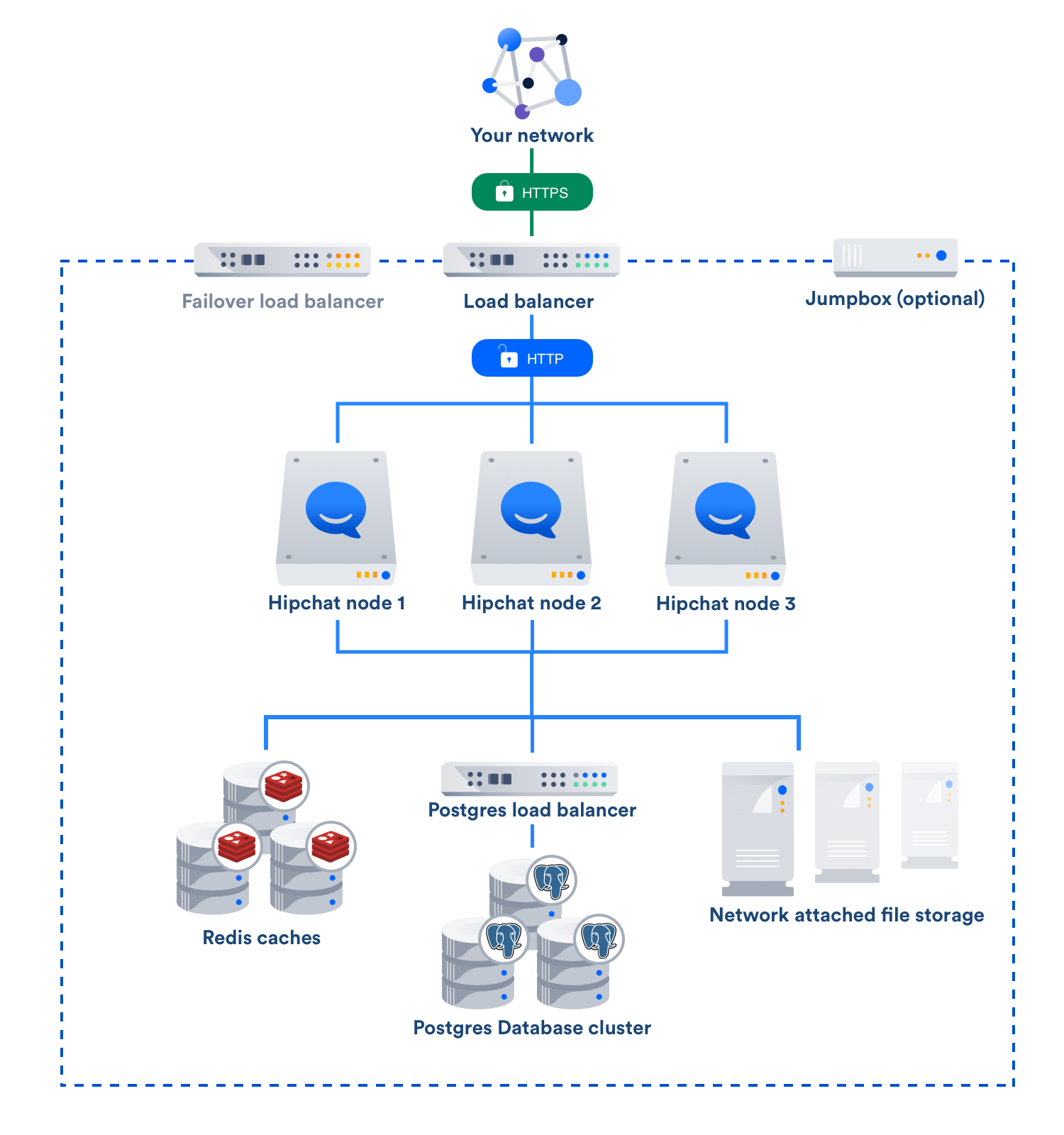 Depending on which Hipchat features you choose to enable, you may need to unblock or write firewall rules for the following ports. If you are using a forward proxy, you can use it to access most of these services without writing rules.

You may use any load balancer that meets the following requirements:

If you will be using publicly hosted Apps, add-ons, or integrations, the service should be accessible from the public internet so that these external services can send responses back to the cluster.

For best performance, you might want to use the HAProxy sample configuration knowledge base article to tune your load balancer configuration.

For an Enterprise deployment of Hipchat Data Center, all Hipchat nodes must be of the same software version, and must be located in the same geographic region.

Then, for each Hipchat node in the cluster:

The latest production binary is:

Make sure your NFS data store uses HA best practices appropriate to your environment, and as defined by your organization.

Redis must also be configured to be highly available, and use an additional load balancer to direct connections. This may require additional hardware or virtual machines.

Postgres must also be configured to be highly available. If you deploy multiple database nodes in this mode, you should connect them using a load balancer so that there is a single endpoint that the Hipchat nodes can connect to.

Once the Postgres instance is running, create a database and service user:

For clarity, we recommend putting the word 'hipchat' in the database name, and in the name of the user that you create to access it. This will help you if you ever need to troubleshoot.

ℹ️   Need some help? Click here for some example commands

Set up the Hipchat VMs

In this step you'll create the virtual machines, deploy the Hipchat node OVA, and configure it. Repeat these steps for each of the three nodes.

From the VM's console:

The node must have a unique hostname, which must be unique among all members of the cluster. (We know it's tempting to just call it hipchat, but resist!)

The Hipchat node's name should also be different from the public DNS entry used to access the cluster. (The node requires access to port 53 over TCP/UDP to resolve DNS.)

If your DNS server does not resolve the hostname you set, you can also add an entry similar to the one below to the /etc/hosts/ file on each node.

The Hipchat node must be configured in the UTC timezone, and must keep the time synchronized using NTP. (This requires access to port 123 over TCP/UDP.)

If your environment does not have access to the internet, or if your organization runs its own NTP servers and you wish to use them, you should configure your Hipchat node to use an NTP service inside your network.

To change the NTP servers use the following command. Replace "time1.example.com,time2.example.com" with a comma-separated list of your own NTP servers.