Repo cannot be forked. Fork hierarchies are limited to a maximum depth of 5

Trying to create a fork fails with the following error:

<repo> cannot be forked. For performance reasons, fork hierarchies are limited to a maximum depth of 5 beneath a given root repository. Please create your fork from a repository higher up in the hierarchy, such as <repo-parent>.

When forking repositories, there is a hierarchical limit to the number of times you can "fork a fork". Consider the following scenario:

In the above scenario, if you attempt to fork fork-5.git you will be met with the following error: 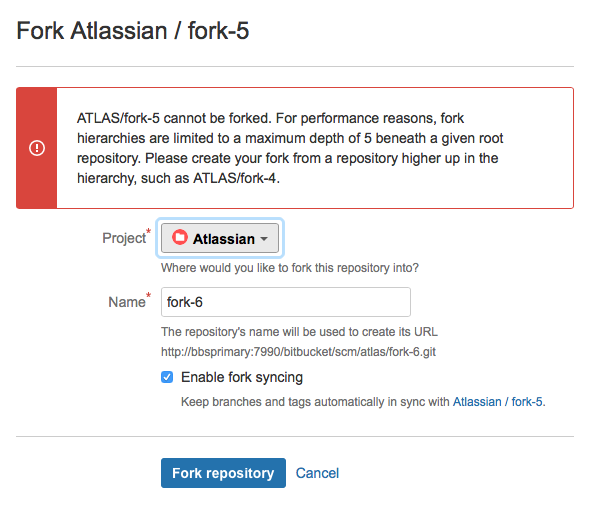 Deleting the upstream repositories does not resolve the issue, because git alternates prevent referenced repositories from being removed on disk even if they are deleted from the UI.

When you have multiple layers of forks, then the outer-most fork is referencing objects in a parent repository, which is in turn referencing objects in its parent repository, and so on, creating a situation where your repository has to traverse "recursive alternates", following the git alternate references through multiple upstream repositories to retrieve the target object. Git itself places a hard-coded limit of 5 on recursive alternates and this limit can't be overridden.

The recommended solution to prevent this issue occurring is to adapt your workflow to prevent creating so many layers of forks. When a forking workflow is used instead of a branching workflow, forks should ideally be made from "higher up" - e.g. from the original repo, or from a direct fork of the original.

When this is not possible there are two potential solutions:

Repacking the repository will pull upstream alternates into the repository's own packs, so it no longer references git alternate objects and can be forked.

To repack the repository:

Disabling git alternates means that forks will no longer be subject to the max depth of 5, however there are significant drawbacks:

For these reasons, this solution is not recommended.